Biogas has been used for centuries and is a relatively low-cost fuel for heating and cooking and a potential renewable substitute for natural gas and imported mineral fuels. Biogas is a natural by product of anaerobic digestion – the breakdown of waste plant and animal material by micro-organisms in the absence of oxygen.

New Zealand and Australia have a successful, internationally renowned and growing biogas sector, with several consultancies and equipment suppliers implementing projects at home and abroad, supported by a well-informed and skilled research sector. The current estimate of total amount of methane collected and used as biogas in New Zealand is around 50 megawatts (MWe).  That's enough energy to power 40,000 households, although most of the current biogas produced is used for heat and electricity in industry-scale applications.  There is potential to increase rural biogas generation from food and animal waste. Increased separation of organic material from the waste stream could lead to the development of dedicated bio-reactors.

New Zealand has developed considerable expertise in the production and use of biogas, particularly from our experience with landfill and sewage gas.

Biogas technologies have reached a level of maturity and automation that can be customised for New Zealand farmers, communities, cooperatives or industrial plant. 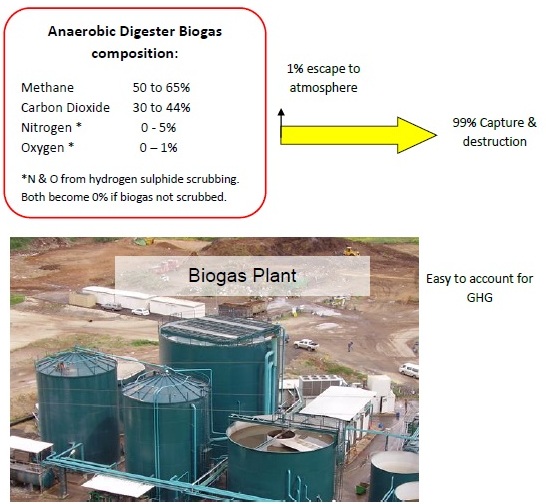 The main current and potential sources of biogas in New Zealand are:

Biogas is generated naturally in landfills since organic matter such as domestic food and garden waste is buried and compressed in a dark, oxygen free environment. Biogas can continue to be harvested for decades after a landfill site is filled.

The process of sewage treatment produces biogas, which is used on site to produce electricity or exported from the site.

Significant growth in the production of biogas is expected as New Zealand moves towards more environmentally sustainable practices for agricultural. New Zealand could be extracting over 1.5 PJ of biogas a year from  dairy effluent if supplemented with other organic material.. The solid residues from the biogas process can be fully used as high grade fertiliser on the farms and would minimise the demand for imported fertiliser.

Food processors in the meat and dairy sectors produce significant amounts of organic residues which can be processed into biogas and fertiliser. The biogas can be used as a fuel for the production of heat for use in food production. The fertiliser can be sold to farmers.